How to Make a WiFi Jammer？ 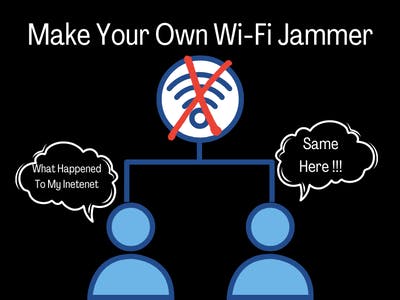 To learn how to make your own WiFi jammer, you’ll need a USB Wi-Fi adapter, a Linux PC (preferably a Raspberry Pi), and software such as Scapy or Wifijammer. You’ll also need Bluetooth scanning software such as BlueMaho. Although making your own WiFi jammer is illegal, there are many ways to hack Bluetooth speakers. You can also find instructions on hacking a Bluetooth speaker, if you’re looking for a fun way to ward off unwanted WiFi signals.

There are many uses for an ESP8266 WiFi Module. One such use is to jam WiFi signals and prevent devices from interacting with a system. This could be done in a number of ways, including filtering for customer gadgets or starting unique attacks. This article will show you how to build a wifi jammer using ESP8266. After that, you can begin to develop your own WiFi jammers to protect your network.

To get started, first download the user-interface.h file to your computer. Next, open it with your favorite text editor (such as Wordpad).

The TX-NZ150W wall-mount phone WiFi signal jammer is self-developed and designed to block WiFi and downlink phone signals. Jamming devices do not cause any harm to the body, so you can install one anywhere you want to protect yourself from the harmful signals. It works by emitting a powerful electromagnetic wave that interferes with the signals from other devices. If these signals are interrupted in the area where the jammer is installed, the device won’t function properly.

The TX-NZ150W wall-mount phone WiFi signal jammer uses a self-developed antenna, RF Amplifier Unit, multiplexer, and main control board to block wireless signals. The main part of the device is its ultra-high-gain antenna. Most traditional jammers use low-gain antennas for each channel. The NZ-150W has a high-gain antenna that transmits a 14dBi signal over a long distance. Therefore, it can effectively be used for blocking Wi-Fi signals in a business conference room, a real estate transaction, and even on a government site.

This tutorial will teach you how to build a WiFi jammer using the Aireplay tool. This tool is capable of jamming wireless networks using fake access points, the blacklist/white list concept, and deauthentication packets. You can purchase an external wireless adapter from a local electronics store or online. It is also possible to make your own jammer by using your own wireless adapter.

To make a WiFi jammer, you will need the following tools. The first one is Aireplay, which you should install onto your computer. The second is the Aireplay script, which is more advanced than the wifijammer script. You will need to change the monitoring mode of your wireless card. You will also need a USB power supply. Once you have done that, you can install the script.

WiFi jammers are not entirely useless, but they are unreliable when used improperly. The NZ-150W is one example of a high-power portable jammer that works on the 2,4GHz spectrum. You can find this jammer on Jammers4u.com. Despite its high price, the TX-NZ150W is a great way to block WiFi signals.

This wall-mounted phone wifi jammer is self-developed by Design Princinple. It uses a combination of antenna, RF amplifier unit, multiplexer, and a smart cooling system. It blocks the signals on 315 MHz, 3G/4G LTE, 433 MHz, and 868 MHz. You can use this device to block the signals of any wireless device within 50 feet.